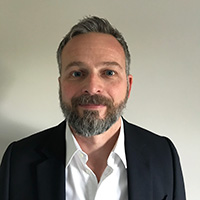 Andrew is a highly experienced Finance Director and Entrepreneur having spent over 20 years in the ports and logistics sector, jointly heading up a business with 150 employees. He brings significant experience in Strategic and Financial Planning, Corporate Governance, Insurance and Risks, HR, Contract and Property transactions and Business Acquisitions and Disposals.

Having disposed of previous business interests, Andrew now gives his time to projects which are charitable, community focused or in support of local businesses.

Andrew is a working Chair at Harbour Place and works closely with our Project Director Robin Barr on strategic and fundraising projects.

Andrew is married with 4 children.

Jo is an Architect who has worked in the private and public sector in Lincolnshire for over 25 years and now runs an architectural and development company in Caistor with her son in law. She is a Director of an architectural practice in Cleethorpes and has been involved in urban regeneration as well as unique private developments.

She has supported and worked with a number of local charities at board level and was a board member at Shoreline Housing Partnership when it transferred from North East Lincolnshire Council Ownership.

Jo has enjoyed teaching and examining the Architectural courses at numerous universities including Sheffield, Sheffield Hallam, Nottingham, Leeds Met, and Huddersfield over the last 30 years and has mentored and worked with young people throughout her career.

Jo lives with her husband. They have four daughters who have all left home, and also two grandsons.

Charli is the UK Media Relations Manager at Ørsted and has spent the last six years in Grimsby campaigning for positive press for the area. Her expertise is in the managing and promoting of social media.

Charli has volunteered is various community roles in the last 13 years, and has facilitated workshops with young people from the area centered around building confidence and communication skills.

Charli spends her spare time helping lift the stigma around mental health, and really enjoys getting out in the fresh air in the local area.

Stan is an Elected Conservative member of North East Lincolnshire Council and also a stakeholder Trustee of the local Citizens Advice Bureau.

Son of Skipper Stan Shreeve, he is a Grimsby man who spent his formative years living in the West Marsh.  Educated at Macaulay Street Juniors and Technical Secondary, Stan went on to qualify as an accountant and general manager developing a career in the food industry and latterly in business services.

Now semi-retired Stan has vast  experience at board level in both the private and public sectors.  Stan has experience of evaluating, funding, integrating and reorganising businesses and has worked with venture capitalists and financial institutions. Stan has also gained considerable experience of pan-European management and reorganisation within a culturally diverse business.

Steve is a Liberal Democrat councillor for the East Marsh Ward and was first elected to serve the local residents in 2003 - he describes himself as a 'Community Politician'.

Having lived on the East Marsh for over 40 years, Steve is passionate about improving the life and welfare of the people in that community.

Steve is a great champion of Harbour Place within the East Marsh and, in turn brings an extremely useful perspective to our Board.

Alan worked for many years at the YMCA and now is involved with other community based projects. He was born and raised in the area and sees his role as a Trustee of Harbour Place as giving something back to the area that he is so proud of.  Alan is passionate about the services that Harbour Place provides.

The skills and knowledge that he has learnt from his life experiences help to support Harbour Place in a wide variety of ways.

Dan is a local planning solicitor who works in local government. He has a wide range of experience with property developers, the voluntary sector and housing associations.

Jodie is a Finance Director of a Multi Academy Trust which comprises of 29 primary academies.  She is a qualified Chartered Accountant and has worked in a finance role since leaving full time education, working in local accountancy practice and also working for herself when she started a family in 2008.